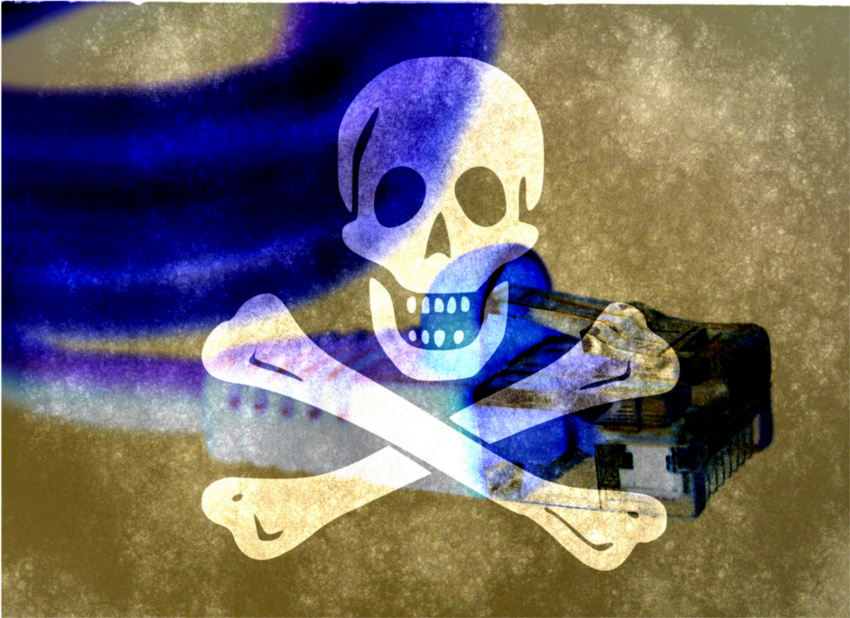 If creativity is a field, copyright is the fence. –John Oswald

We’ve all done it at least once. From the earliest days of Napster to the evolution of torrents, almost everyone with access to a computer has at one time or another pirated some type of media, whether it be music, film, e-book, software, etc. It’s relatively easy, cheap, and much more convenient than going to the store to buy said media.

But wait! Too many downloads and you might find the Men in Black at your door. Copyright police. Corporate goons sent to enforce the idea that those songs belong to someone else. But does anyone even know what constitutes copyright? Let’s examine some brief (and extremely incomplete) history.

The year is 1710. Up until now, a group by the name of Stationers’ Company held exclusive printing rights on all published materials in Britain. This also meant that they had the power to censor as they saw fit. Eventually, this angered enough people that Parliament sought to end the monopoly. Enter the Statute of Anne, named for its passage under the reign of Queen Anne. This allowed for a copyright period of fourteen years, after which the author could apply for one extension of a similar time frame. Afterward, the work would fall under public domain. Sounds reasonable right? A work could potentially be off limits except to the author and his designated printers for twenty-eight years, after which it was fair game for the public to expand upon.

Then came a slew of copyright laws from 1734-1888, including one in 1842 that extended copyright to the end of an author’s life plus an extra seven years. Now, if this period was less than forty-two years, the work would be off limits for a full forty-two years even if the author died a couple years after publishing the work.

In 1790, the U.S. created their own copyright law. Similar to the Statute of Anne, this act allowed authors to have exclusive rights over their work for 14 years. This included the right to renew for a second 14 year period if the author was still living at the time of expiration. In 1831, the copyright term was extended to 28 years with a potential extension of 14. In 1909, the extension period was elevated to 28 years, once again leveling it with the initial copyright term.

Eighty nine years later, after many more extensions added to copyright terms, the U.S. finds themselves signing away their digital rights in the name of copyright protection. On October 12, 1998, President Clinton made an official decision to stifle creativity. According to this article on Wikipedia : –

“it criminalizes production and dissemination of technology, devices, or services intended to circumvent measures (commonly known as digital rights management or DRM) that control access to copyrighted works. It also criminalizes the act of circumventing an access control, whether or not there is actual infringement of copyright itself. In addition, the DMCA heightens the penalties for copyright infringement on the Internet.” Forgive me if this is broad, but the passing of the DMCA takes away our basic human right to do what we please with things we’ve purchased. In addition, it was one of the first (or at least the most intense) crackdowns on the greatest example of anarchy we have to date. The internet.

Fast forward 13-14 years. The U.S. tries to pass SOPA and PIPA. This Wikipedia entry sums up the former: –

“The originally proposed bill would allow the U.S. Department of Justice, as well as copyright holders, to seek court orders against websites outside U.S. jurisdiction accused of enabling or facilitating copyright infringement[clarification needed]. A court order requested by the DOJ could include barring online advertising networks and payment facilitators from conducting business with websites found to infringe on federal criminal intellectual-property laws, barring search engines from linking to such sites, and requiring Internet service providers to block access to such sites.[8][9] [read more here]…

Here’s yet another Wikipedia entry to sum up PIPA. (Sorry for the copy and pastes. I’m not smart enough to sum all that up in my own words): –

“The bill defines infringement as distribution of illegal copies, counterfeit goods, or anti-digital rights management technology. Infringement exists if “facts or circumstances suggest [the site] is used, primarily as a means for engaging in, enabling, or facilitating the activities described.”[10] The bill says that it does not alter existing substantive trademark or copyright law.[11] [read more here]…


Sounds intense, right? Copyright holders were essentially trying to broaden their jurisdiction in order to profit globally from copyright infringements, as well as create an environment that perpetuates more fear instead of something helpful, such as education. Education about fair use policies, or even better, Creative Commons licenses.

Stay tuned for Copy This! Part 2: …it compounds upon itself.