The Power of Words – Do words such as ‘nigga’ or ‘Bitches’ really still hold the power they use to? 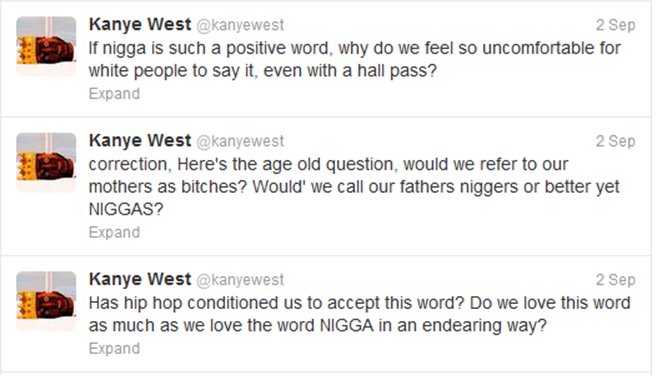 The Power of Words

The use of profanity has been a part of the Hip-Hop scene since its beginning. The free use of such language has set rappers apart from artists of different genres as well as kept them in the news. The music scene today has seen a huge increase of artists express themselves through the use of such language, however it can be argued that many of these artists are purely using this sort of language as a crutch rather than a way to express themselves. The trend by artists in some rap songs nowadays seems to be to use swear words as much as possible, just to spark a reaction rather than use the words as a tool of self expression.

A week or so ago I was shocked to see Mr. Controversy himself, Kanye West, questioning whether or not artists should swear in their music on twitter.

The fact that a high profile artist such as Kanye is even troubled enough about the subject to address it on twitter suggests to me that it is an issue that plagues certain artists within Hip-Hop today. It also raises the argument about whether or not certain words such as ‘nigga’ or ‘Bitches’ still hold the power they use to. Words like these have always been prevalent within Hip-Hop and as time has gone by people have come to expect to hear this sort of language in a rap song. However Kanye West raised a couple old but decent points in his twitter rant.
One of his tweets was the age old argument about black artists using the word, ‘nigga’ and how hypocritical it was for people to get offended when someone of a different race used that term to describe them. I feel the use of such derogatory words have in fact helped race relations among a generation of people who have been brought up with rap music. In a sense the word has lost a bit of its power and meaning through over usage. The same can be said for the word bitch, female rappers such as Nicki Minaj have now embraced the word. Nowadays you would struggle to find a female whose twitter bio that doesn’t describe themselves as a, ‘bad bitch’.

It’s well known that controversy helps to sell records and with that in mind it is important to note that profanity to some degree is important in whipping up hysteria around a song or an album. Labels have teams of people whose job is to target certain demographics within society, who will be more susceptible to this kind of language and would go out of their way to hear rap songs in which curse words are used. As Hip-Hop grew darker so did the language and violence within the genre, some may argue that it simply reflected what was going on in society at the time causing a shift in attitude among artists doing Hip-Hop. The 90’s saw a rise in the use of profanity among Hip-Hop with the introduction of west coast gangster rap. Artists such as Snoop Dogg, and N.W.A caused widespread controversy with their flippant use of words such as, ‘Bitch’ and ‘Nigga’. The attention that these artists gained from using this type of language encouraged more and more artists to use profanity and to become more misogynistic in their lyrics, which helped to improve record sales of Hip-Hop during the 90’s. However from the late 80’s right through the 90’s there saw a change in the culture among young people, profanity became a part of their language and in some ways their identity. The social economic situation for many young people during this period changed and so did their attitudes towards music.

Kanye’s outburst helps to highlight the moral mine field some artists face when making a track. It also shows the power of Hip-Hop and the words used by artists, in how they have seeped into people’s vocabulary. In some ways it can be argued that profanity is part and parcel of Hip-Hop however is it truly necessary, and should artists really be held accountable for their right of free speech?